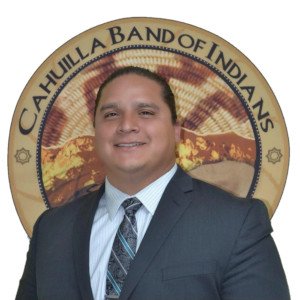 Daniel Salgado has served as Tribal Council Chairman for the Cahuilla Band of Indians since elected in January, 2016. Prior to this, Chairman Salgado’s tribal leadership positions include seven years of service as the Chairman of the Cahuilla Casino Board of Directors. During this time, he was responsible for overseeing overall operations of the tribal business and gaming activities. In addition to serving as Tribal Council Chairman, Chairman Salgado’s current civil services for his tribe and surrounding community include: Committee Member of numerous elected Cahuilla Boards and Committees, Secretary for the California Nations Indian Gaming Association, Board Member for Malki Museum, and appointee to the Native American Advisory Committee (NAAC) for the California Department of Transportation (CalTrans). In addition, he is Chairman of the 1999 Compacted Tribes Steering Committee (CTSC), which is comprised of 17 federally recognized tribes in California.

Chairman Salgado is currently the Assistant General Manager for the Cahuilla Casino, where he oversees daily operations and strategic planning implementation of Cahuilla Casino and Mountain Sky Travel Center, both Cahuilla tribal enterprises. In this operational position, Chairman Salgado oversees capital project management and administration for Cahuilla Casino. During his initial two years with the Cahuilla Casino, he was instrumental in obtaining financing and was project manager for two successful capital projects: the Solar Renewable Energy project, which generates the majority of the business’s current energy demand, and the financing and building of the Mountain Sky Travel Center, a convenience store and gas station. More recently, Chairman Salgado played an instrumental role in obtaining financing for a new casino and 57-room hotel for the Cahuilla Band of Indians scheduled to open in January 2020. Moreover, Chairman Salgado is dedicated to aiding the Cahuilla Band of Indians in preserving the Tribe’s cultural heritage and in growing its enterprises so as to ensure the Tribe achieves its self-sustaining goal.